This is the story of the weaving of the fabric that brought the Icon of Saint Xenia of St. Petersburg, Russia to the Lafayette Urban Ministry in Lafayette, Indiana in the USA.

In 1988 two threads of this story took place. The ﬁrst was the canonization of Xenia Grigoryevna Petrova (1719/1730-c.1803) as St. Xenia of St. Petersburg by the Holy Synod of the Russian Orthodox Church during the year of the Millennial celebration of the church. Xenia Grigoryevna Petrova had been wedded to Colonel Andrey Fyodorovich Petrov, an ofﬁcer in the Russian army and a chanter at the St. Andrew Cathedral. She was widowed at the age of 26 and she spent the rest of her life as a “fool for Christ,” giving away all that she had and serving the homeless, hungry, unemployed, and children in distress. She wandered the streets of St. Petersburg dressed in the military coat of her deceased husband.

The second thread of the story was on one of my trips to the Soviet Union to celebrate the Millennium of the Russian Orthodox Church. I was in Leningrad (renamed St. Petersburg after the fall of the Soviet in 1990’s) and was taken to the chapel and gravesite of St. Xenia in a cemetery on Vasilievsky Island in the Smolenka River in the northwest of the city. After hearing her story and seeing the Chapel of St. Xenia, I acquired a small reproduction of St. Xenia which hangs on the wall of my study even as I write this story.

The third thread in this fabric didn’t occur until late in 2011 when my wife Caryl and I made the decision to make a trip to Russia late in 2012. In preparation for this trip, I attempted to revive some of my contacts from my earlier trips into the USSR and then into Russia after the fall of the Soviet. In the late 80’s an organization that I helped organize at University Church at Purdue in 1983 called the John T. Conner Center for US-USSR Reconciliation developed a “sister church” program. This program was designed to make connections between churches of the USSR with churches in the US. 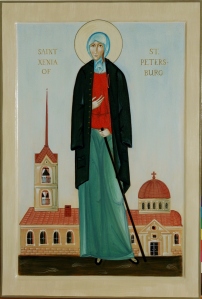 One of the successful sister church relations was between the Community of Our Lady of Fyodorovskaya, St. Petersburg, Russia and First Presbyterian Church of Middletown, Ohio. It still has connections and visits between the members of both communities. I had visited First Church when a small Russian delegation was present, back in the late 1990’s. One of the members of that delegation was the daughter of one of my good friends from my previous visits to St. Petersburg, Fr. Vladimir Sorokin, whom I ﬁrst met in 1984 when he was a priest at St. Nicholas in St. Petersburg. In 1986 he became the Director of the St. Petersburg Theological Academy. It just so happens that the priest of Our Lady of Fyodorovskaya is Fr. Alexander Sorokin, son of Fr. Vladimir. Just a side note for any who read this, this church was the one located near the Theological Academy that had been converted to a dairy in the Soviet period and had pipes running out of its roof. Since the fall of the Soviet it has been returned to the church and restored.

In an effort to renew contacts in St. Petersburg I called the pastor of First Presbyterian in Middletown and he was able to give me the names, address, and email addresses of several people in St. Petersburg who had been a part of contacts made between the two churches.

Through this, the fourth thread in the fabric was identiﬁed and that is an iconographer, Philip Davydov of St. Petersburg, who is the director of the Sacred Murals Studio of St. Petersburg. In making contact with Philip he was able to get me in contact with Fr. Sorokin. And so it was on our October 2012 trip to St. Petersburg that I was able to visit with Fr. Vladimir and renew an old friendship. It was a beautiful renewing of our friendship and exciting to see him in his new position as Dean of the Cathedral of St. Prince Vladimir in St. Petersburg. At the conclusion of our time together he asked if there was anything that he could do for us to make our trip to Russia complete. I responded by asking if there was anyone in the congregation that we could employ for the next day to serve as a guide and interpreter. His response was yes he could and also he would supply us with a car and a driver.

So the next morning enters yet another thread in the fabric and this is our meeting with our interpreter for the day, a young lady, Olga Makarova, a member of St. Prince Vladimir Cathedral. She teaches English to Russian speakers and Russian to English speakers at the University and the Theological Academy. We also met another Vladimir who was our driver both the day before, and then again for this day. We had a delightful day with both of them and got to see more of St. Petersburg as a result.

The follow up with Olga occurred when we returned back to West Lafayette and I checked my email, and lo and behold Olga had found me on Facebook. She had sent us a message welcoming us back home and hoped that we had a good journey. Early in the summer of 2013 we received an email from Olga that she accepted a job in the Russian House at William and Mary University in Williamsburg, Virginia. She was coming to serve as a tutor in the fall semester and as a teacher and tutor during the spring semester.

Now yet to another thread in this fabric. In the fall of 2013 I developed and taught a six week class on Eastern Orthodoxy and used my many experiences with the Russian Church as my window into the world of Orthodoxy. As I developed this class I realized that I had to spend one session on the subject of icons and their signiﬁcance in the world of the Eastern Church. I relied on the internet, as well as my contacts with Philip Davydov and Olga Makarova. Olga gave me the insight of a lay person and Philip gave me his insight as one who writes icons as well as frescoes and other pairing of religious objects. Let me insert at this point for the non-Orthodox, icons are not painted but are written and follow a very rigorous discipline in their creation as they are regarded as windows into Heaven.

It was through the preparation for this class that I had re-visited the Icon of St. Xenia and I began to think about my long contact and relationship with Lafayette Urban Ministry. I was involved in the evolution of this organization in its beginnings as a consultant and then again after ten plus years in expanding the rationale for such an approach to the urban scene. A few weeks after this thinking I received word from Olga that she was going to be going home over the Christmas season. Then my mind started clicking and I wondered if Philip Davydov would be interested in writing an icon of St. Xenia for me to present to LUM.

I contacted Philip and we exchanged emails over the next couple of weeks. He suggested that he would like to do an icon of Jesus feeding the 5000 for placement with LUM. Then I explained to him that such an icon would be an excellent one for LUM/St. John Food Pantry, but that the one of St. Xenia would be better for the ofﬁce of LUM. Then I identiﬁed Xenia for Philip as the ﬁrst of the urban ministers in the Christian tradition. I further suggested that maybe he could do two icons for us, one for the ofﬁce and one for the Food-Pantry. He responded very graciously and said that he would do the two. Then I moved quickly to contact Fr. Bradley Pace of St. John’s to get his endorsement of the placing of a Russian Icon on one of the walls of the Food Pantry. Fr. Pace’s response was afﬁrmative. Following this conversation then I called a friend, who is Orthodox and a member of St. Alexis our local Eastern Orthodox Church, to see if Fr. Gregory, the priest at St. Alexis, would be willing to be involved in the process. Fr. Gregory has committed to doing a blessing of the icon at the time of the public recognition of it at the ofﬁce of LUM. This will be done sometime in the near future.

Finally, I asked Philip as to when he could have the one of St. Xenia ﬁnished, explaining to him that I had a courier who would be

willing to bring it back to the states after her Christmas visit in St. Petersburg. His response was yes it would be done, but that he needed information from Olga for the permit to take the icon out of Russia. This was done and Olga went home with a mission to return with the icon in January.

A running question with this was how would we get it to the Lafayette area. Part of what kicked this whole thing off was the fact that Caryl and I had planned to go to Williamsburg in January to spend time with Olga. So on January 19, 2014, Olga passed the icon on to me to bring back to Lafayette.

Upon returning to Lafayette we left the package intact until we could arrange a time with Joe Micon, Director the Lafayette Urban Ministry, to meet with Caryl and me to unpack the icon. This was done on February 6, 2014. It was a very inspiring event for the three of us as we unpacked the icon. The three of us were very excited to view this icon of one of the ﬁrst urban ministers in the life of the Christian community. It was quite an ecumenical experience, Caryl an Episcopalian, Joe Micon a Roman Catholic, and myself a retired Presbyterian Campus Minister, admiring an icon of a Saint in the Russian Orthodox Tradition.

Now the fabric has been woven and we are ready to place the ﬁrst icon in the ofﬁce of LUM in the near future. In all of this I see the world of the computer and the internet as agents of the Holy Spirit. Praise be to God, Father, Son, and Holy Spirit! Amen.

This event is now scheduled for Wednesday, May 21, 2014 in the evening in the ofﬁce of the Lafayette Urban Ministry, at 420 N. 4th Street, in downtown Lafayette, Indiana.

Join LUM online and help us serve children and families even better.

2 responses to “Icon of Saint Xenia Arrives at LUM”